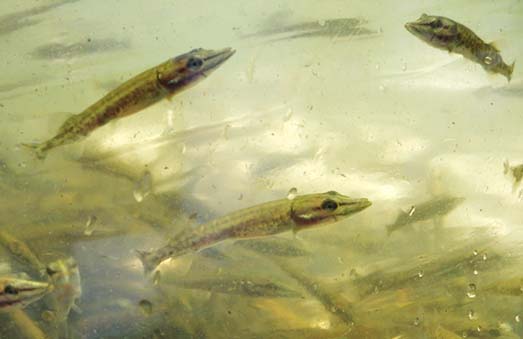 Increasingly carried out melioration of meadows and arable lands contributes to a gradual decrease in the water level in many reservoirs. From the fishing point of view, this is a disadvantage, as it limits the area of ​​the coastal zone, where spawning and development of juvenile forms of many valuable species take place. Fish with specific environmental requirements are the most endangered, adapting to changed conditions with difficulty.

The successful course of pike spawning depends on the presence of an appropriate plant base at the bottom of the shallowest parts of the reservoir or within coastal lagoon lands. Due to the lowering of the lake level, many such places remain beyond the edge of the water surface.

Reducing the area of ​​available spawning grounds leads to an excessive density of fish participating in breeding and, as a result, to the grouping of a large number of offspring in a limited space, to strong food competition and possibly to cannibalism. In addition, sudden drops in the water level after successful spawning can have catastrophic effects on spawning close to the shore or on the youngest larvae remaining in this zone.. In such situations, restocking may turn out to be a necessary procedure to maintain the state of the stock in the dimension dictated by economic needs..

Ever since the view has been revised, according to which the effectiveness of restocking was to exceed the effects of natural reproduction, it is recommended to first take measures to improve the spawning conditions. One of them is the protection of the reproductive period, purposeful, especially near spawning grounds ensuring its successful course. Fishing for artificial spawning should be abandoned in such places, and spring fishing to be carried out in regions, where, despite the lack of proper substrate, spawning groups are formed, or in tanks, in which the aim is to limit the number of pikes.

Another measure commonly used to increase the reproductive capacity of fish is the setting of the economic dimension, below which fishing is prohibited. This is to ensure that each individual in the population can participate in the act of reproduction at least once.

Pike protective dimension (in year 1980), determined by the order of the Ministry of Agriculture - 30 cm of total length, it does not meet this condition and should be raised in tanks, in which the genre deserves to be supported. The benefit of a higher economic dimension will also be ensured by very large annual weight gains of older individuals and only the increasing harmfulness of their impact on other species included in the fish stock is the factor limiting the upper limit.

If there are possibilities to adjust the water level, it is advisable to keep it during the spawning and development period of the larvae near the maximum height. A deliberate treatment is sowing grass in non-overgrown areas, a covered by the deluge expected in the spring. The construction of artificial armchairs, which was rarely practiced during pike spawning, gave good results in the regions of the Rybinsk Reservoir deprived of substrate. (Zacharowa, 1953). Spawners were eager to spawn in garlands from juniper and spruce branches, attached to the poles, which were mounted at a depth of 20-30 cm, perpendicular or parallel to the shore. After losing its stickiness, the roe fell to the bottom, then the chairs were moved to other places. However, this method fails in areas accessible to perch (Krupauer, Point, 1965), and, moreover, it can only be recommended after examining how the hatching larvae cope with the lack of vegetation.