Upon contact with water, the pike's egg changes, which make, that after only 0.5-2 minutes she cannot be fertilized. The only way for the sperm to penetrate inside is through a narrow canal that pierces the egg in place, where there is a window on its surface - the so-called. micropyle (Lynx. 17).

When the area around the window is wetted, the walls of the channel quickly tighten. The second factor limiting the fertilization time is the period of sperm activity, which passes through the tubule with the help of the flagellum serving as the musculoskeletal system. According to Lindroth (1946), the sperm remain able to swim more or less through 1 minute at 15 ° and approx 2 minutes at 5 °.

Lindroth provides a description of the developmental phases following the penetration of the sperm cell (1946), Gihr (1957) and Chicewicz and Mańkowska (1970). Egg membrane, so far adhered to the yolk, as a result of contact with water, it expands and a space with a cross-section of 0.1-0.2 mm is formed between it and the yolk ball, which retains its initial size, filled with perivitic fluid. This increases the egg volume by 25-40%. When it swells, the fat globules accumulate at one of the yolk ball poles (the animal pole). 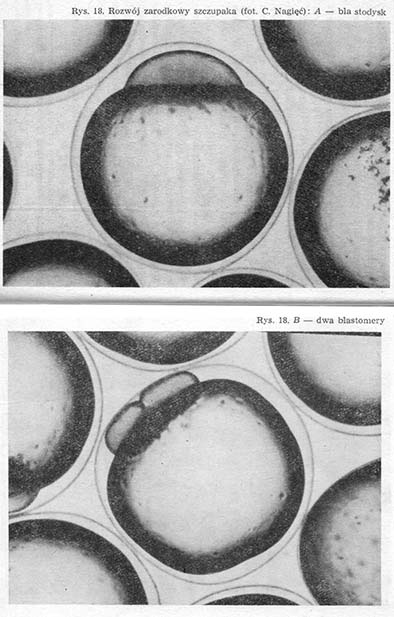 The author, courtesy of Ing. Celestyna Nagięcia, who agreed to share unpublished photos (Lynx. 18 i 21), constituting a fragment of materials for the prepared master's thesis.

One hour after fertilization (at 10 °) the swelling process ends and the germplasm is concentrated at the same pole, Figure 18 — A is shown in the form of a molding body in the shape of a cap (blastodysk). This is the stage preceding the vertical division of the plasma plate into two (Lynx. 18—B), four (Lynx. 18—C), then eight and sixteen cells (blasitomers). 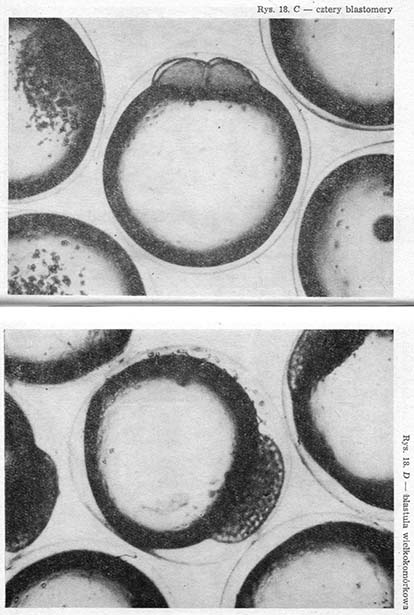 Further, already less regular divisions are made in the foam and horizontal planes, and their effect is the formation of a large-cell blastula (Lynx. 18—D), later on small-cell, which in shape resembles the earlier stage of the plasma cap. Cell material thus produced (blastoderma) begins to cover an increasing area of ​​the yolk ball (epiboly process). Along the edge of the blasltoderma there is a thickening in the form of the so-called. marginal ring (Lynx. 18—E), from which the body of the embryo will later develop. 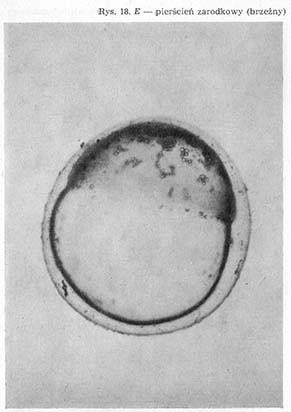 In the final stage of fouling (epibolii) the rest of the free yolk protrudes from under the blastoderm in the form of a characteristic plug (Lynx. 18—F), vanishing later in the blastopore closure stage. 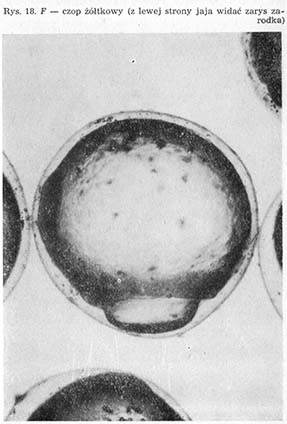 Before that happens, the longitudinal shape of the embryo is clearly visible on the surface of the yolk ball (Lynx. 18—G). 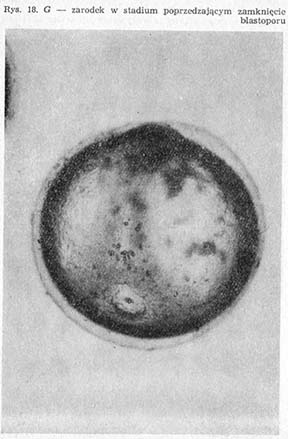 Some stages of the formation of the organs of the body are shown in the figure 19.