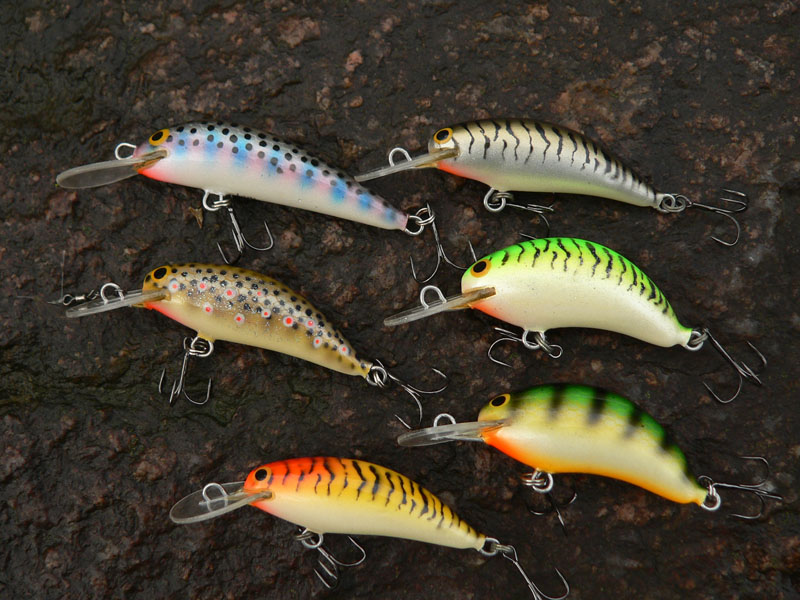 "Suspenders" are a type of wobblers, behaving in water like this, as if they were weightless. The advantages of this lure are revealed mainly then, when sinking or floating wobblers turn out to be completely ineffective.
Today, wobblers are the standard lure of almost every predator angler. The floating models of this lure are particularly popular and only few colleagues decide to spin with sinking lures (opinion prevails, that sinking lures are harder to catch). The sinking wobbler goes deep under the water and many anglers cannot feel it, how deep. The consequence is numerous snags. Recently, it is gaining more and more popularity in the angling market, wobbler called suspender from the English. After casting, the wobbler descends very slowly to a certain depth, and then "hovers" in the water, for the increasing pressure prevents him from going any deeper. A floating wobbler with a very low displacement behaves in a similar way, “Weighted down” metal leader. So suspenders are wobblers, which by floating in the water, they behave exactly the same, like fish standing in one place. Wanting to learn a little more about the behavior of fish, just watch the fish in the aquarium for a while. We will notice immediately, that some of them like to stand still in one place and only occasionally move their fins slightly. Many fish living in natural waters also behave in a similar way.

Pike and perch, and often also zanders, sometimes they like to hunt in the water. Artificial lure floating in the water, so suspender, it is wonderfully effective at such moments. The suspender can be easily held in one place, otherwise, this lure is much easier to lead, than a floating or sinking wobbler. Not to mention that, that it has a more natural job. I have had such situations many times over the water, that the suspender turned out to be much more effective than the best floating and sinking lures.

Imagine for example, that you are spinning with a two-piece floating wobbler. The surface of the water is as smooth as a mirror, the sun shines, in a word, bad weather for pike fishing. You know from your own experience, that it's better to keep your back to the sun, so you can see everything that is happening in the water. After many casts, the only attraction was the pike escorting the lure twice. Both predators assisted the wobbler almost to the very tip of the rod, and then they quietly turned and left. At this point, you are attaching a suspender to the line. After a few casts, the pike returns the bait again. You stop winding the line, the wobbler stops in place, pike too. If the suspender did not travel to its maximum depth, begins to dive, however, unlike a sinking wobbler, it does it very much, but it's very slow. Not too fast a crank rotation makes, that the lure moves majestically forward. No pike can withstand such an excitement and immediately decides to attack.

Keeping the suspender motionless at the height of the predator is a huge advantage, which is especially noticeable during the changing pace of the lure. Variable lead speed for each lure, even the most traditional one, always provokes predatory fish to bite, however, very often they are empty beats. When we spin with a suspender, almost every bite results in a successful strike. In this respect, traditional wobblers do not even match this bait. Therefore, when you wind the line evenly, you should move the tip of the rod slowly to the side with short movements, rotate the handle a few times to its maximum deflection, where an effective jam is still possible, then retract the tip (also in short jumps) to the starting position. We must always be careful when handling the rod, keep the line taut. Retracting the stick significantly slows down the movement of the lure. The floating wobbler then starts to emerge, while the sinker goes down. And this is where the bite usually occurs! This also applies to fishing with a horse-drawn carriage – each braking of the boat causes the immediate emergence of the floating wobbler and the sinking of the sinking person. Only terns are of interest to the wobbler on the surface of the water, while a sinking model is likely to catch something at the bottom. Unlike traditional lures, the suspender always remains at "hunting" depth. Because the boat is still moving a little more, the lure "bounces" slowly in the water, deceptively reminiscent of a sick fish. Pike, perch and zander, watching the "fish" behaving like this, nothing else remains, as soon as to attack an "easy" prey.

When fishing with an ordinary wobbler, we sometimes feel a gentle tap, but either the jam hits the vacuum or the fish detaches after a few meters of hauling. Why? It is true that I cannot look under the water, however I believe, that it looks something like this: a predatory fish is approaching the wobbler and when it has it right in front of him, opens his mouth. The negative pressure created at this moment "pulls" the bait into the predator's mouth. However, if at this point the bait rises or falls down, the attack usually ends only with nudging the lure with the edge of its mouth. Stuck in place or slower moving suspender, it never descends or rises to the surface, thanks to which the predator does not have any difficulties with catching the prey. So if you ever find out, that day, for normal lures, he won't take anything anyway, and at the same time you will feel the presence of predatory fish nearby, try to catch a suspender. Perhaps it is thanks to this bait that you will not come home with a stick.