The type of food consumed is the basis for the division of fish into "quiet feeding" and predatory species. Pike is one of the most typical predators. Means, that during almost its entire life it eats almost exclusively fish and other vertebrates, and that only this type of food can fully satisfy the physiological and biological needs of the organism.

In the first stage of development, the only food source is the contents of the yolk sac. But before it is completely resorbed, 6-8 days after hatching, reaching a length of 10-12 mm, the larvae begin to catch the tiniest forms of zooplankton. Period, Where fine plankton is the main food ingredient, does not exceed one week. During this time, the digestive tract - originally shaped as a straight tube - differentiates to form a loop of the intestine and the stomach..

As soon as the stomach is separated - with a length of 15-17 mm - a significant change in the diet takes place. Foraging larvae, as it continues to grow, strive to select ever larger organisms, which is justified by the necessity of economic energy expenditure (Carcinoma, 1955). The foraging technique, from the very beginning - as in adults - it consists in attacking each object separately. With the size of the victims unchanged, and the ever-increasing mass of food consumed, the number of attacks undertaken would soon have to exceed the capacity of the organism. Thus, small rowers and copepods are gradually being replaced by the largest forms of plankton, larvae of insects and fish. 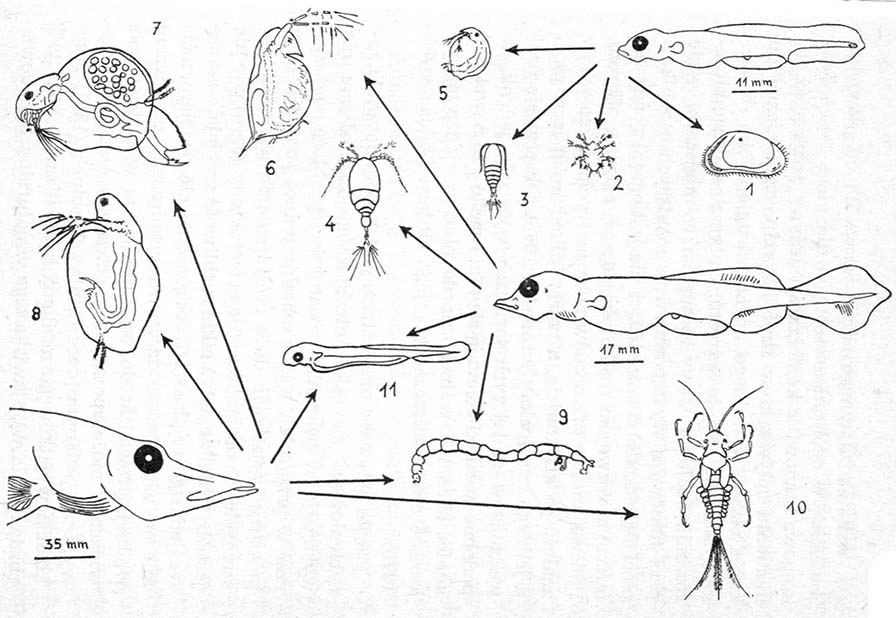 This process is fostered by changes in body structure, especially the enlargement of the mouth and development of the throat teeth, for pushing food down the esophagus. On the other hand, the lateral line organ becomes the mechanism that triggers a new type of reaction to the movement of large objects in the vicinity of the position occupied by the larva., which in the first phase of its feeding - with the minimum sight range - performed a warning function, associated with the reflex to escape.

The moment the stomach is formed, it is ready to start predation. Under favorable conditions, it can take place less than two weeks after hatching, and from then on, fish larvae become the most beneficial food for young pike.. Not only a high concentration of food mass in one facility, but also a greater amount of digestible and assimilable substances determines their high - compared to invertebrate fauna - nutritional value. Most of our lakes, especially the great ones, the area of ​​coastal pike spawning grounds is used by later roach. The difference in the spawning date of the two species usually leads to a situation, in which massively hatching roach larvae immediately enter the food spectrum of young predators waiting for them. Often, however, thermal conditions, delaying the spawning and hatching of roaches, extend the period of feeding on invertebrate fauna beyond the minimum determined by the advancement of morphological development. In the floodplains, and, due to their considerable isolation from the main tank, not accessible to roaches at all, invertebrate fauna is by necessity the only food until they run off into the littoral zone, that is, almost to the end of the larval period. Both have a negative impact on the pace of growth. Pike larvae find optimal foraging conditions in places, where, with the mass occurrence of the youngest roach individuals, the effectiveness of predation is not limited by the excessive development of vegetation that protects the victims. When analyzing the digestive tract, you can then find a dozen or so, and even several dozen roach larvae in one pike (Żuromska, 1966). However, observations in smaller lakes showed, that similar conditions are rare there and that even at the end of the larval period, the share of roach in the eaten food does not exceed 40% his weight (Załachowski, 1970).

The phenomenon of intense cannibalism, which is often noted in artificial rearing of stocking material, does not occur in natural conditions. It can be the case, when within one population of larvae there is an exceptionally large variation in the size of individual individuals. But even then, the threat is not very great, because low mobility reduces the chances of meeting and seeing each other. Only the excessive concentration of larvae in a limited water space, leading to coexistence within the field of view, may result in a more severe conflict state. Except as given by Hunt and Carbine (1951) an example of the exceptional severity of cannibalism (about 20% examined larvae), this phenomenon was not found in natural environments or at all (Frost, 1954), or has been recorded sporadically (Makkoviev, 1956; Franklin, Smith, 1963; Załachowski, 1970 i inni).