The organism of the fish is diseased to a lesser extent than other living organisms. These diseases are most often caused by external factors. These could be water properties, containing harmful chemicals or low in the ingredients necessary for life, or organisms penetrating into the body of the fish and causing disturbances in the proper functioning of the tissues or even living at their expense.

In pike, the effects of pathogens are observed from the earliest development stages, especially in hatcheries, where it is difficult to create optimal environmental conditions for incubated eggs.

Drawing. Abnormal hatching of pike larvae - they pierce the egg with their tail (photo. C. Bends).

Under the influence of water hypoxia, as well as pollution by industrial plants, may arise described by Gottwald and Winnicki (1966) egg distortions, irregularities in the hatching process and in the structure of the larvae. 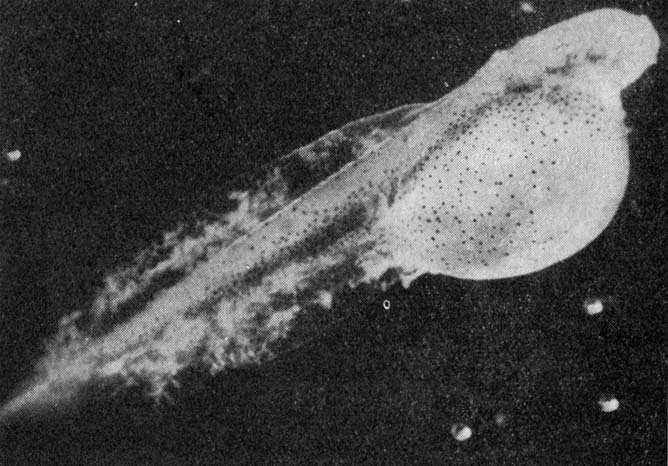 The spores of the fungus get into the brood with water (Saprolegnia) causing thrush. Initially, it only attacks dead eggs, from which, however, the developing filaments of the mycelium gradually become healthy, they bind them into compact lumps, they soften the egg membrane, then, as a secondary effect of their actions, there is a massive death of all eggs due to lack of oxygen or contamination with bacteria, or at best, premature hatching of non-viable larvae. Mold can also be harmful to adult fish. Although it does not attack healthy individuals, however, it often appears on damaged tissues (mechanically or as a result of the action of another pathogen) and - with the participation of bacteria - causes them to die, formation of significant cavities, and as a result, often irreversible changes in the body and sleep.

Another mushroom (Branchiomyces demigrans) causes gangrene of gills in pikes, a disease that leads to disturbances in the breathing process. Hyphae of mycelium, developing in the tiny blood vessels of gills and gill lobes, they block their light, inhibiting blood circulation and the supply of nutrients. Characteristic whitish nodules form in the places of obstruction, and often all the ischemic flakes turn white, they die off and fall off after a while. Mycelial branches pierce the walls of the vessels and exit. Gangrene causes the greatest losses among young pikes, measuring 20-25 ohms, and thrives primarily in waters with a high organic content - i.e. ponds and fertile lakes - taking on acute forms, when the water temperature exceeds 22 ° C.

Many diseases are caused by parasitic animal organisms. "Catalog of the parasitic fauna of Poland" in part II - "Parasites of the dragon-mouthed and fish" (edited by J.. Grabdowa, 1971) it lists 56 species found in pike. Most of them, especially if they happen sporadically and in small amounts, is not pathogenic, some, however, can cause serious diseases.

Among numerous protozoa, two should be mentioned, which cause more serious diseases in pike. Those are: sporowiec Henneguya ophia, which, if it is numerous in the ovaries, may adversely affect fertility and Trichophrya piscium, attacking the gills of young fish.

Relatively harmless to pikes - due to the occasional occurrence - is broad furrowthorn (DiphyUobothrium large;), belonging to the group of tapeworms. It deserves to be mentioned as one of the few fish parasites that are also pathogenic for humans, in which it develops into a mature form, up to a length of 15-20 m. The complicated development cycle also includes two intermediate hosts and takes place in water, which, along with the faeces, gets the eggs contained in the excreted members of the parasite. From the eggs, larvae develop into ciliated and self-moving larvae (coracidium), and of them - already in the body of the planktonic crustaceans from the copepod group that eats them - the next larval stage (procerkoid), which, in turn, may develop further into the so-called. plerocerkoid, if it enters the body of a pike or other predatory fish together with a shellfish that is ingested by a fish.

Drawing. The development cycle of the broad moth: 1 - eggs in the expelled segment of the tapeworm, 2 — coracidium, 3 — procerkoid, 4 — plerocerkoid (wg Laglera, slightly changed).

Plerocerkoidy, embedded in the bowels, in the muscles or in the gonads, hardly noticeable, they can penetrate the digestive tract of humans or other mammals together with undercooked or undercooked meat, where, upon reaching maturity, they are able to produce large amounts of eggs. Despite the fact that sulcus mite is not common among the masses, there is a risk of contamination and should be avoided by good hygiene and avoiding eating meat that is semi-raw or insufficiently salted..