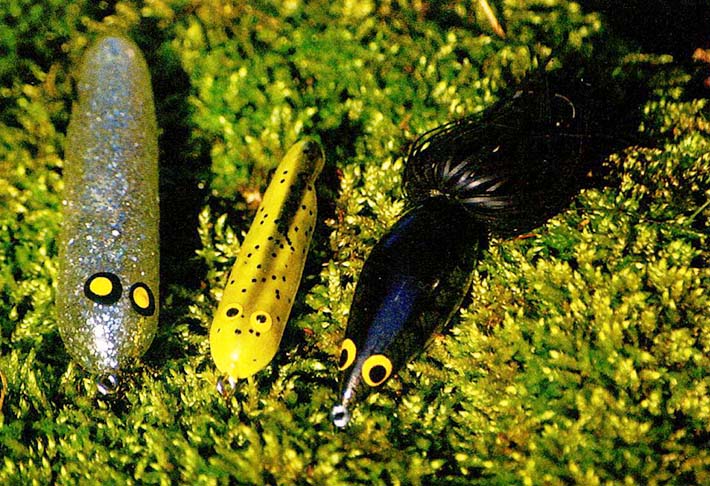 Goblin, ghost i grassrat – are the acclaimed, non-stick lures by the American company Mann's. In high summer they are very dangerous for pike.
Have you ever tried spinning pike on a hot summer day?, and in addition among dense aquatic vegetation? You take care, that it doesn't make sense? Wait a minute, don't quit so soon. I have a proposal for you. Go with me on a fishing trip to one of my favorite Pomeranian fisheries. Then you can mock me at will – but only then, when you do not catch a single fish with the methods I suggest. Is everything clear? Now we'll begin. We're going to the beautiful, quite shallow oxbow lake. A complete wilderness. Green calamus with a characteristic smell, old alders growing on the shore, insects perched on a smooth mirror. hundreds of small circles to prove it. that rudds and bleaks do not waste time and are busily busy in the upper reaches of the water. Suddenly, the idyll is brutally interrupted. Little red feathers leap into the air in mortal terror. It was the pike who had just decided to eat something. You must be frantically wondering, what to do here, for the predator to end up in the landing net. I understand it perfectly, I have similar thoughts too. However, you are looking more closely at the fishery and you can see huge skins of floating duckweed and lush, aquatic vegetation rising almost below the surface. There is no question of fishing with spinning in such conditions. You're looking angrily at me.

You unnecessarily get nervous right away and give up fishing. Ultimately, that's what we went fishing together for, so that I can show you some "American" tricks. My secret weapon in this type of fishery are special artificial lures. So we look into the bait box and what we see? Little. hollow rubber "rollers". These lures were invented mainly for surface fishing for large-mouthed bass. The smaller lure is the goblin (skrzat), a slightly larger model lies right next to it – ghost (spirit); both lures come from the USA. Have you ever seen them before?? No? Apparently a fishing tacker, from which you usually buy, it only brings "news" then, when they are already a "marketable commodity". In a word - it is a seller who does not keep up with the competition. Now take a look. how our native pike react to the American pike, bass bait.
For fishing with hollow elastics” we use a bit stiffer, than normal, a pike rod, lines with the lowest possible extensibility and a thin metal leader. Everything is ready? Well, we start spinning. Plum – and the goblin is lying on the water among the vegetation rising below the surface. We are starting the lead. Cyk-cyk. cyk-cyk, always two, consecutive pull-ups on a stick (with minimal line reel winding). Our elf slowly starts moving. Does not matter, whether we run it among dense vegetation, or we pull it through a sheepskin of algae or eyelashes, the zigzag elf easily jumps over all obstacles, and strong vibrations are propagated in the water, provoking pike. A predator standing somewhere among the weeds immediately notices the prey making noise on the surface so "brazenly". Being an experienced hunter, pike behaves like this, as if it didn't interest him at all. Let's not be fooled by appearances and consistently continue to "splash" the lure on the surface of the water. Suddenly the pike seems to feel, that it is clearly visible, such a provocative prey can pass his nose. He slowly follows our goblin, and on the surface of the water you can see sagittal waves spreading to the sides, forming in front of the noiseless predator. so what, are you still as composed as you were at the beginning and still have dry hands? You don't have to answer. Catching pike from the surface of the water with the sight method almost always results in an increased release of adrenaline into the blood. However, it is worth trying to control your emotions, because then fishing will become more relaxing. We keep a close eye on the approach of the pike – will attack the bait, or will he suddenly turn back and quietly return to his position? Bravo! The pike suddenly accelerates and the green torpedo hits the target precisely. In a split second, the water beneath the goblin will explode with a wonderful fountain and tiny, The "poor" leprechaun disappears suddenly in the toothed mouth of the predator. We jam immediately. Sit! The pike jumps into the air like a rocket, dances on the surface of the water. Wild shaking of the mouth, water droplets popping out from under the gill covers – all this takes less than a second and the spotted predator plunges into the water. Unfortunately. and for us luck, despite the extraordinary bravery, Nothing can help the pike anymore and after a short time, the thrilling haul eventually lands in the landing net. And how. liked it? Great, another pike is standing a little further. Throw. wait, plum-plum. plum-plum. Thread. no reaction. We try again. Throw. plum-plum. plum-plum on the surface. Nothing again. It's hard. since the little goblin does not suit the predator. we will try something else. Maybe a floating mouse will provoke him to attack?