CHARACTERISTICS AND GEOGRAPHICAL DISTRIBUTION OF THE ORDER OF PIKY PIKE

Among the three families that make up the Esocoidei suborder today, only in pike (Esocidae) traits associated exclusively with predatory life evolved. Processes, accompanied by gradual elongation of the body, enlarging the mouth opening, moving the dorsal fin backwards, lasted several tens of millions of years. In the layers of lake sediments from the vicinity of the German city of Halle, coming ,from the Eocene - early epoch of the first period of the Cenozoic era - found fossilized remains of a small fish, measuring approx 10 if, which after reconstruction was included in the extinct family Palaeoesocidae and recognized as the direct ancestor of modern pikes. The differences in construction are easily noticeable (Lynx. 1),

but the excavations have provided further intermediate links in the form of closely related species with an ever increasing number of vertebrae (tab. 1).

TABLE 1. – The process of increasing the number of vertebrae in successive links in the evolution of the genus Esox (according to Nikolski, 1956).

The other two families - Dalliidae and Umbridae - previously deviated from the main line of development (Lynx. 2), producing forms that differ greatly in terms of morphology, and biological. 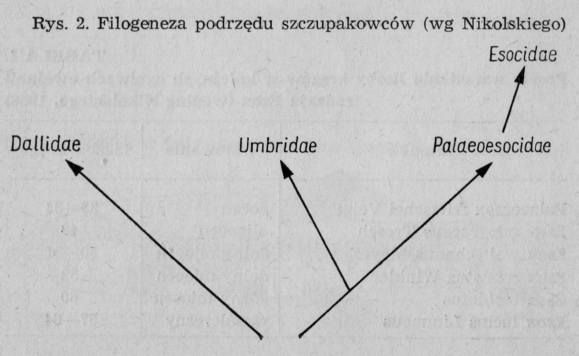 Of the three existing species of the genus Umbra, one - Umbra krameri Walbaum - inhabits the Danube and Dniester basins, the other two: Umbra limi Kirtland and Umbra pygmeae de Kay - eastern states of North America. The only representative of the genus Novumbra (Novumbra hubbsi Schultz) it is known in the waters of western Washington. They are small (do 11 cm in length) freshwater fish, hiding in quiet places of small and silted reservoirs, able to use atmospheric air in poor oxygen conditions, using a swim bladder adapted to perform a respiratory function. They feed on invertebrate organisms, and exceptionally also small fish. Females - larger and more colored than males - take care of the eggs, which they place in the hollows of the bottom. Extremely resistant, it has a low temperature, they can survive long periods of time in a state of slow life processes.

The family Dalliidae is represented by only one species (Dallia pectoralis Beau), found in rivers, lakes and bog waters of Northeast Siberia and Alaska. Harsh climatic conditions, prevailing in frozen tanks for most of the year, endures thanks to the ability to live through periods of many weeks, during which it remains frozen in the ice. It feeds on small invertebrates, as well as plant food and does not reach longer than 20 cm.

A small number of modern forms characterize the entire group of pike and in this respect the pike family (Esocidae) it only slightly surpasses the other two. It includes the only type of Esox, which includes five species. Only one - the pike Esox lucius known to us - occurs in European waters. The names given to him in the countries of Eastern Europe contain similar source-words: Russian "szczuka", Czech "śtika", Hungarian "czuka", Romanian "stiuca"; other names: Swedish "gadda", Danish "gedde", Norwegian "pike", German "hecht", Italian "luccio", Spanish "lucio", french "brochet", Dutch "snoek", English "pike". Of the four remaining species, it stands out with the broadest geographical range, which covers large areas of both continents of the Northern Hemisphere (Lynx. 3). 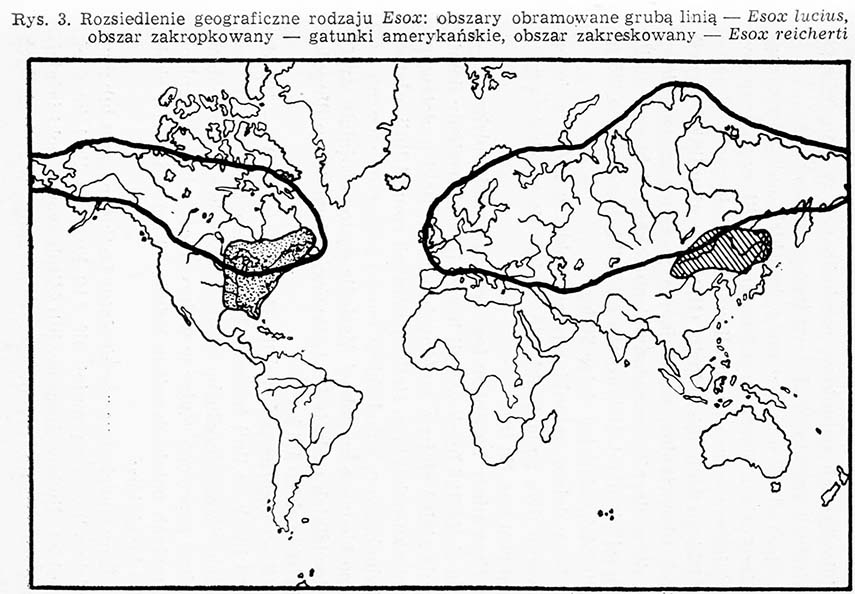 In the United States, A.. P. and Canada is known as "northern pike" (northern pike) in contrast to three similar species in terms of appearance and biological characteristics, displaced in the south-eastern region of its occurrence.

Among the American pikes, Esox masquinongy Mitchill is the largest, popular under the local name "muskellunge" and differs from the European one with a smaller scale (150 and more on the sideline) and the coloration falling into a dark gray shade with irregularly scattered gray-silver spots on the sides of the body. Record individuals grow up to 2,5 m in length, reaching the weight 50 kg.

Two more American species, one of which forms two subspecies, they do not equal the size known in the masses. Those are:

Esox niger Le Sueur (eastem albo chain pickerel) - has approx 125 scales in the lateral line. The coloration is dominated by green, composed of various shades. The golden shimmering sides are covered with a network of dark streaks and lines, one-color fins, and under the eye there is a strongly marked black strand running downwards. It inhabits densely covered zones of small rivers, lakes and ponds. Achieves 60 cm in length and weight approx 1,5 kg.